Links to the old web pages of KKE

The international sites of KKE gradually move to a new page format. You can find the previous versions of the already upgraded pages (with all their content) following these links:

Need to strengthen the ideological and political struggle against anti-communism, for the- regroupment and counterattack of the workers' movement

Of particular importance were the contributions, experience and concerns discussed during the European Communist Meeting which was held on Monday, December 9 in Brussels with the theme: “The Communist and Workers' Parties of Europe against anti-communism, the falsification of history by the EU and its governments, for the regroupment of the labour movement as a necessary precondition in the struggle for the overthrow of capitalist barbarity, for socialism”, co-organized by the KKE and its non-registered MEP, Kostas Papadakis. 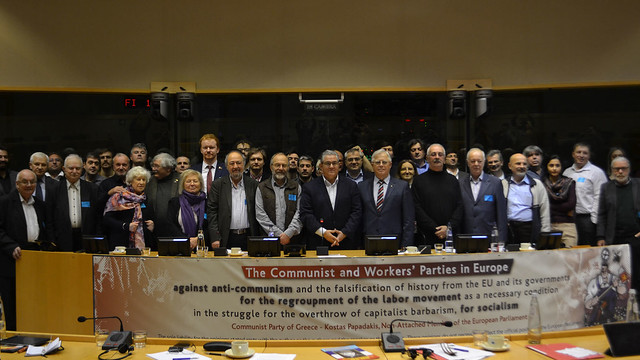 The introductory speech was made by the GS of the CC of the KKE, Dimitris Koutsoumbas.

The delegates who took the floor had the opportunity to exchange experience and information on the intensification of anti - communism and repression by the EU and the bourgeois governments in Europe. At the center of the speakers' attention was the need to strengthen the ideological and political struggle against anti-communism, the distortion of history, repression, persecution of the communists, the ban on communist parties, as a necessary condition to raise the level of consciousness of the working class, for the regroupment of its labor movement in an anti-capitalist,

The delegates strongly condemned the recent anti-communist resolution of the European Parliament seeking to equate communism with the monster of Nazism-Fascism, distorting historical truth while expressing their unequivocal solidarity with the CPs facing persecution and bans by bourgeois governments. They particularly emphasized that this effort goes hand in hand with whitewashing  fascism and the EU's support of reactionary, even openly fascist forces, such as in Ukraine, to achieve its imperialist goals.

The huge contribution of the USSR and the national liberation movements led by the CPs of Europe in crushing fascism during World War II was highlighted during the meeting. It was also stressed that anti-fascist struggle must aim the causes of fascism, the rotten capitalist system that bears it.

The delegates who took the floor noted that contemporary anti-communism does not only intend to distort historical memory and to slander socialist construction in the 20th century, but it also seeks to persuade, mainly the younger generations, that it makes no sense to question the exploitation system that bears crises, poverty, wars and refugees and to struggle for the overthrow of capitalist barbarity.

During the meeting it was also stressed that the attack and repression of the Communists are a precursor of a more general intensification of the repression against the workers'-people's movement, marking an intensification of the attack against social, democratic, trade union rights and the gains that have been achieved by the working class and the other popular strata through hard work.

It was also emphasized that the regroupment and counterattack of the labor movement of Europe for workers', social and democratic rights, against the plans of the monopolies and the imperialist organizations of EU and NATO, will give the necessary response to the anti-communist attack, it will light the way of overthrowing the rotten capitalist system and the construction of socialism - communism, where the people will be the owners of the wealth that they produce.